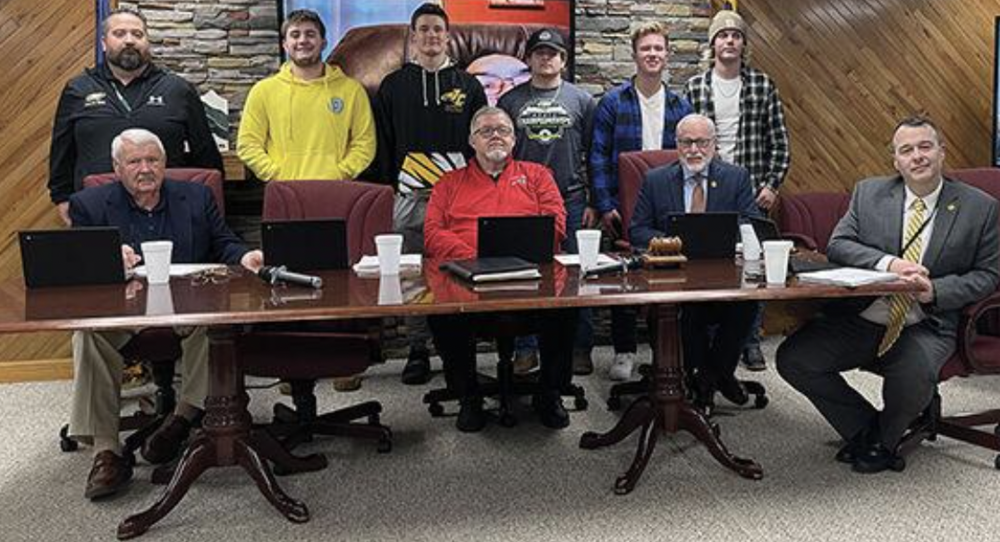 During its regular meeting on Monday, Feb. 28, the Johnson County Schools Board of Education recognized the Johnson Central High School girls bowling and boys swim teams for their appearances at state tournaments this year.

“We’re super excited always, (about) all of our student athletes, but especially these two particular groups, they had the opportunity to go compete at the state level, the bowling team competed in Louisville, and the swim team competed at the University of Kentucky in Lexington,” Arms said. “Fantastic performances, I do know that the bowling team has since received a nomination to compete at a national-level tournament ... So, Todd Conley ... I’ll turn it over for you.”

Conley opened by thanking the board for providing the students of the Johnson County Schools system the opportunities and facilities to succeed as consistently high levels.

“First of all, I want to thank the board and Mr. Arms, Monica, all administration for providing the opportunities for our kids,” Conley said. “When I say opportunities, yeah, I’m saying it for my bowling teams, but just at this board meeting alone, here we’ve got the FFA, we’ve got swimming and we’ve got bowling. How many high schools in Kentucky have those three, not many. So, thank you all.

“The next thing I want to do is thank the coaching staff. Here, Chad Castle and Donnie Hackworth, Brett Loney and Rick Wheeler that help out. It takes a whole team of coaches to take on the boys and girls and be as competitive as we are,” Conley continued. “I know there’s videos on Facebook of the next group of people I want to thank and congratulate and appreciate and that’s our parents ... there’s not much that I can say about this girls team, that they haven’t already done. When you bowl for a state championship, that’s all you can ask.”

“These girls went down there, we went last year for the first time in school history, and then we lost the best bowler on this side of the state in probably 10 to 15 years in Hannah Hackworth and everybody thought, ‘Well, Central will be down for a little bit,’ but these girls proved that we’re going to be there for years to come, because most of this is eighth grade, ninth grade and tenth grade,” Conley said. “So, thank you all once again, and that’s all I have.”

Arms then introduced the boys swimming team, speaking highly of their accomplishments.

“The next team is going to be our boys swim team, swimming is kind of similar to wrestling and I like to compare it to that, because it is a grueling sport, there’s a lot of time, a lot of hours and a lot of things as far as nutrition, just a rigorous schedule, hop on a bus early on a Saturday, go compete, come back, winter months, it’s just nonstop, so I’m going to turn that over to Coach Nathan Reel and let him kind of go through and explain a little bit more of the accomplishments, but again, another team that we are so very proud of,” Arms said.

“So, we’re here today to honor the state qualifiers, but I want to say, before we do that, I’m excited about the future of our swim team. Like the bowling team, we’re young, we’ve got a lot of potential, boys and girls, and I hope to be here in the future talking about our girls relays that are going to state, but I want to pair a little bit with what Mr. Conley said, we’re very grateful to have the facilities we have. We’re one of six, I believe, schools in the state that have our own pool, and I don’t know that you can put an amount on the benefit that that has to us, not just for the swim team, but the things that we’re allowed to do, like having swim camp, swim lessons, have the next generation of elementary school swimmers with us, learning,” Reel said. “It’s these people that are here today, these swimmers, that are in the water today doing these kinds of things. I’ll put my swimmers with any other sport or any club out there, as some of the best kids that you’ll ever see. That being said, I have the state qualifiers with me today, so as I call your name, please stand up.”

Reel then introduced Jaydon Mayhan, Jacob Rubado, Connor Castle, Nick Hardin and Nick Arrowood, and went on to explain that some of this team of young swimmers had started this year and improved at every showing, while also coming within a second of a long-standing school record in the 200 meter freestyle relay, after the team lost three seniors last year.

“I’ll start with Jacob Rubado, here, he was the first one we’ve had in a long time, the first in our current re-alignment for Region 9, regional champion, and he did it in the 50-meter freestyle, made him automatic All Region team, he was a runner-up in the 100-meter freestyle and was on both relays that qualified for state, so the maximum number of events you can qualify for in swimming is four and he did all four, so that’s a great accomplishment for him,” Reel said, then transitioning to talking about how the young team hadn’t lost much of its speed after losing three seniors last year.

“Next is the 200-meter freestyle relay. Now, last year, our 200-meter freestyle relay was within a half second of a record that has stood for, now, 23 years. We lost three seniors off of that relay, and Jacob Rubado, and accompanying him this year are Nick Arrowood, Connor Castle and Nick Hardin. Now, they stepped in, and they were within a second of that now-23-year-old school record,” Reel said. “So, we brought three more people in and we swam just about as fast as we did last year, so that says a lot about their character and their drive to succeed. They got faster from regions to state, and they were just outside of qualifying for finals for state ... just on the edge, they were actually an alternate to swim that evening, but, unfortunately didn’t get to swim. But, that’s as far as we’ve made it in a long time and I’m super proud of them and their success.

“Also, in the 400-meter freestyle relay, last year they did break a 22-year old school record, and we have three of those gentlemen with us returning and ... we brought in Connor Castle to that relay, and I’m happy to report that for the second year running, we broke the school record again, so congratulations to those boys,” Reel continued. “We’re actually going to leave from here to go change the record board and update it with a new name and a new time.”

Superintendent Thom Cochran congratulated both teams on behalf of the board and thanked them for their hard work before allowing them to leave the meeting, while board Chairman Bob Hutchison elaborated further on the significance of what these students had achieved.

“What an incredible accomplishment that the coaches and the students and the sacrifices that the parents have made. We don’t even have a bowling alley in our town, so they make the extra effort to go to Prestonsburg, practice and do whatever they do to be as good as they are, so we’d like to thank the parents and everybody that was associated with the bowling team and swimming team for doing everything that they do, so, thank you,” Hutchison said.

The Johnson County Schools Board of Education meets on the last Monday of each month at 5 p.m. at the district’s central administrative offices on the JCHS and Johnson County Middle School campuses and all meetings are open to the public.